The Float Session it is an increasingly effective therapy to eliminate stress and promote a feeling of deep well-being.

In Lisbon you can find this natural therapy at the Float in Spa. With 3 units in Lisbon - Rato, Picoas and Belém - Float in is one of the most sought after spas due to the inclusion of the Floating Session in its concept.

It may seem strange, but the truth is that when entering the float, the body floats without any effort. The water is at body temperature, the light goes out and all stimuli are consequently turned off. The 300 kilos of Epson Salt inside each float, the mind travels far and the notion of time is completely lost. The mind and body reach a state of relaxation and inner peace that is difficult to explain in words.

Inside each float there are 300 kilos of Epsom salt to 600 liters of water.

Epsom salt is composed of sulfate and magnesium combined with carbon and oxygen that have therapeutic properties, unlike the common salt that contains sodium chloride, and is therefore harmful to health. The chemical formula is MgSO4 · 7H2 which is presented in the form of crystals.

This salt revitalizes and rejuvenates the skin, stimulates blood circulation and acts as a powerful detoxifying effect. Its use is especially beneficial for joints and bones, reducing the symptoms of arthritis and arthrosis.

Reduces inflammation and facilitates muscle function by stimulating nerve reactions, helping to eliminate toxins and increase the capacity for nutrient absorption. The composition of Epsom salt also regulates the levels of magnesium and enzymes in the body. The use of Epsom salt in the flotation, will also favor the hygiene of the water, eliminating all bacteria. Epsom salt creates a powerful barrier to pathogens.

When floating, the brain enters a state of "theta brain waves", which result from a deep state of relaxation. This is the state that Buddhist monks seek to achieve with years of practice, which makes fluctuation a shortcut to the benefits of years of meditation.

Since under normal conditions, the brain functions in the recording of theta waves for very short periods, it was difficult for scientists to measure the effects on the body and brain of this type of functioning. When it was verified that during the time that it floats, in an environment of sensory deprivation, the brain is induced to function in theta waves, it became possible to make these measurements.

During the period when the brain works at this frequency, the balance of the left and right hemispheres of the brain is favored, the release of endorphins, the stimulation of creativity, the increase of concentration and the capacity for learning.

A profound state of inner peace and generalized well-being is also achieved. There are also records, of mystical experiences and sensations that are beyond human reason, during and after the period of fluctuation.

In addition to floating, the only way to induce the brain to function in theta waves for long periods of time is through deep meditation.

Buddhist monks function in this brain register while meditating. Thus, the relationship between the effects of inner peace and emotional balance resulting from fluctuation is obvious, with the same effects that arise from meditation on a Buddhist monk. Fluctuation is then a shortcut to some of the benefits of several years of meditation.

Benefits of holding a Float Session

The Floating Session is a very effective therapy to eliminate stress and promote a feeling of deep well-being. However, it has many other benefits in terms of physical and mental health and can be used effectively on a regular basis to treat many common health problems.

We can even consider that the Fluctuation Session is an alternative to the use of certain drugs, specific to lighten specific situations. Mainly problems related to the mind: depression, anxiety, stress and sleep problems.

The Float Session demonstrated to be an excellent assistant in the cure or improvement of patients who presented symptoms of this type of conditions, allying themselves, or not, with psychological therapy sessions. The results of all studies were positive, giving the Fluctuation a notoriety and credibility in the scientific world. 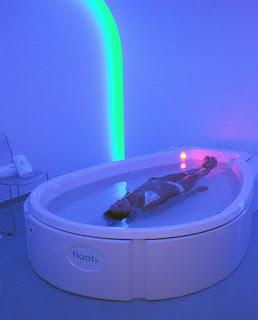 One hour of floating is equivalent to 4/6 hours of sleep, which is great both in terms of energy recovery and physical level, accelerating the body's recovery process. In addition to these effects, the Fluctuation Session allows an improvement in the quality of sleep, an increase in physical and cognitive capacities and a reduction or elimination of muscle pain.v

Many other studies have shown that flotation therapy has a huge impact on improving mood. The suggested reasons for this increase in the level of happiness include high levels of dopamine and endorphins, due to the deep meditative state achieved during flotation therapy.

If you are pregnant, floating is a great help to reduce muscle pain and swelling in the legs, since floating stimulates blood circulation. After the Floating Session, future moms will feel a profound sense of lightness. At a time when it is difficult to find a good position to sleep, the flotation session is very advisable and can be carried out safely after the 12th week until the end of pregnancy, being the last weeks when pregnant women most benefit withdraw from this therapy.

It is also beneficial in the postpartum period, as it helps mummys to be to have a deeper rest, to feel more relaxed, with more energy, as well as restore lost hours of sleep.

Floating regularly serves as a therapy for a huge number of problems, being constantly used by athletes to accelerate muscle recovery and increase performance. Therapy enthusiasts will be able to use flotation as part of a weekly or monthly routine, to improve their productivity or simply to maintain their well-being.

If you arrived on a trip, nothing better than a Fluctuation Session, it reduces jet lag, promoting a “reset” to the biological clock.

Fluctuation has many other therapeutic benefits that have been studied for decades around the world.

Throughout Europe and the United States there are clinics specializing in the use of floats for exclusively therapeutic purposes, with several Universities and scientific departments that have dedicated themselves to the investigation of this type of treatment called R.E.S.T. - Restricted Environment Stimulation Therapy.

These studies attributed fluctuation to credibility and notoriety in the scientific community, demonstrating the validity of flotation therapy as an alternative to drug consumption in cases as diverse as depression, anxiety, stress, sleep problems and chronic pain.

The University of Karlstad in Sweden, is one of the Universities that is most dedicated to the study of the benefits of flotation, having found results that revealed that patients who complained of chronic pain improved a lot, as well as other studies related to addictions such as smoking, eating disorders, alcohol and drugs in which positive changes in consumption habits were demonstrated.

In the Department of Organizational Psychology at the Dutch universities in Amsterdam and Leiden, fluctuation is considered a useful tool in the management and control of stress.

“Floating Away”: The Science of Sensory Deprivation Therapy, in Discover Magazine (ler artigo)
This article demonstrates the benefits found in terms of: Deep relaxation of the muscles; Regulation and attenuation of blood pressure and hormone levels related to stress and anxiety; Attenuation of regular headache, insomnia and rheumatoid arthritis; Relief from intractable chronic pain.

The Presence or Absence of Light During Fluctuation with Restricted Sensory Stimulation: Effects on Cortisol Production, Blood Pressure and Mood, in Springer (ler artigo)
This article demonstrates the benefits found in terms of: Improved sleep quality; Regulation of blood pressure.

Enhancing the Creativity of Psychologists Through REST Therapy, in Springer (ler artigo)

Effects of REST Therapy and Visual Imaging on Athletic Performance: Tennis, in Springer (ler artigo)
This article demonstrates the benefits found in terms of: General well-being of athletes; Improvement of physical performance.

The Pronounced Effects of Flotation REST Therapy on Recovery from Muscle Contraction Exercises, in US National Library of Medicine (ler artigo)
This article demonstrates the benefits found in terms of: Help in muscle recovery after exercise.

REST (Restricted Environmental Stimulation Therapy) as Treatment for Children with Autism, in Journal of Development & Behavioral Pedriatrics (ler artigo)
This article demonstrates the benefits found in terms of: Behavioral, cognitive and social improvements in children with autism.

This article demonstrates the benefits found in terms of: Improving the quality of sleep; Regulation of blood pressure. in DIVA – Academic Archive Online

Although floating only brings advantages, there are some contraindications:

You can offer this natural therapy in the form of a voucher to a very special person who really needs to relax! Online or at all Float in Spa receptions, purchase your gift vouchers. Call to make your reservation by contacting  213 880 193.